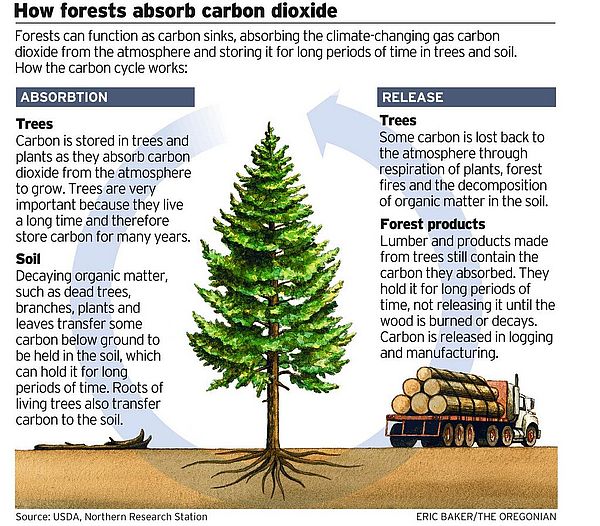 Click on picture for larger view of just how trees absorb carbon. 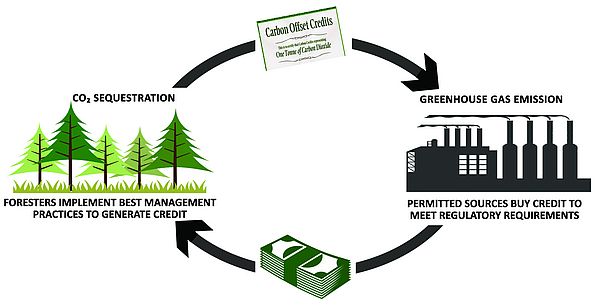 How participating in the carbon market can provide a new revenue stream for landowners while helping attack climate change.

Cold Hollow to Canada has been a leader in Vermont when it comes to climate change adaptation and mitigation strategies. Our Woodlots Project was one of the first pilot demonstration forest projects, and the first private lands project, with the USFS National Institute of Applied Climate Science (NIAC). Our cross-boundary stewardship program includes a climate change analysis of all the forest management plans for each woodlot owner in the three woodlot programs. The analysis gives landowners an idea of what they are already doing to address climate change and what more they can do to keep our forest healthy as we experience climate change stress. An individual landowner has the ability to affect the well-being of the planet by managing their forests ecologically with climate change adaptation strategies. But a well-managed forest does even more.

Managing carbon is the key to controlling and minimizing the escalation of climate change worldwide. The greatest impact will be to keep fossil fuels in the ground and change the way we use energy. The other is sequestering and storing the carbon now in our atmosphere. Trees do all three very well. Our forests are a renewable resource and when managed well, the balance of carbon stored and sequestered is greater than the carbon used from wood for energy. So, using renewable wood from an ecologically managed forest for heating and power generation is a better choice than fossil fuels.

Storage is when we keep the carbon locked up in trees, roots, soils and durable wood products. Larger, older trees store more carbon than younger trees. Old forests (greater than 150 years old) in the northeast are an example of effective storage. On the other hand, sequestration is the capture of carbon in the air. We know that fast growing trees capture vast amounts of carbon. We need both storage and sequestration. In Vermont, which is 77% tree covered, we store and sequester almost equally what we produce in emissions. All landowners can manage their forest to store and sequester carbon, and some will, to do right by the planet without compensation. However, in some cases, this action has a monetary value. Carbon offsets are reductions made to compensate for emissions elsewhere. The credits that monetize the offsets are purchased by companies that emit carbon from sectors who store and sequester carbon.

CHC has been part of a feasibility study working with the University of Vermont and The Vermont Land Trust to look at carbon credits at a Vermont Scale. This project specifically looks at an aggregation model to sell carbon credits on the volunteer market.

Spatial Informatics Group (SIG) was hired to conduct this feasibility study. This project was funded by UVM, High Meadows Fund, and Vermont Housing and Conservation Board.

CHC has a unique role with our boots on the ground knowledge of the forest landscape and who owns it. Our role is to act as the agent for a group of landowners. The project leaders worked with CHC to identify several large parcels that could be grouped together to allow entry in the market. One of the largest hurdles for landowners to enter the carbon market is the economics of scale. It is a very expensive process to document the amount of carbon in a forest. The forest also has to have the stocking necessary to enter the market in the first place and management of the forest must be maintained to keep stocking above the regional baseline. In the history of carbon markets, several thousand acres are needed to make the numbers work and to balance the cost of assessment with the price of a carbon credit. This essentially precludes most VT forest landowners from entering this marketplace. The hope is that this project will develop a protocol for aggregation, making it possible for landowners who combine their properties can enter the carbon marketplace.

The result of the study shows that aggregation of larger VT size parcels is feasible. The project parameters included parcels with at least 450 forested acres and had a flood mitigation potential. Protection and enhancement of interior forest block was a co-benefit. The final project had one parcel that was 289 acres of forest but ranked very high in the other categories. The preliminary value of a credit in an aggregation model is around $15.00 per acre per year over a ten year period. There is more work to be done, included going into an actual project phase which CHC is hoping to be involved with. While it is true that larger parcels, greater than 3,000 acres are easier, the aggregation of smaller parcels will have a larger impact on climate change mitigation. We hope to do our part, stay tuned.