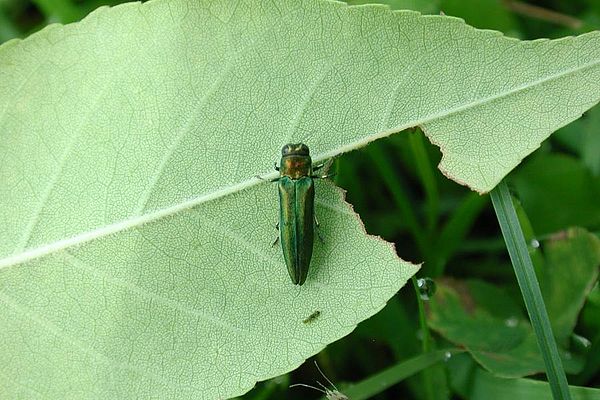 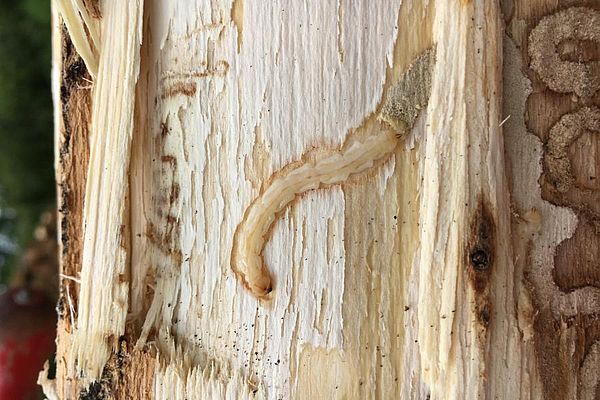 Larvae feeding on the inner bark, cutting off the tree's flow of nutrients. ~VT Invasives 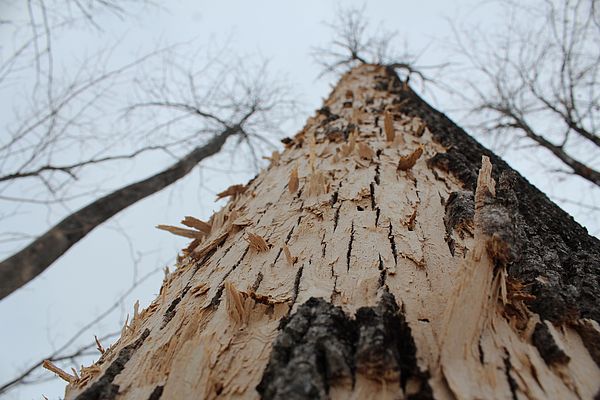 Woodpecker flecking is a sign of EAB. Take a closer look at the bark for the "D" shaped exit holes. 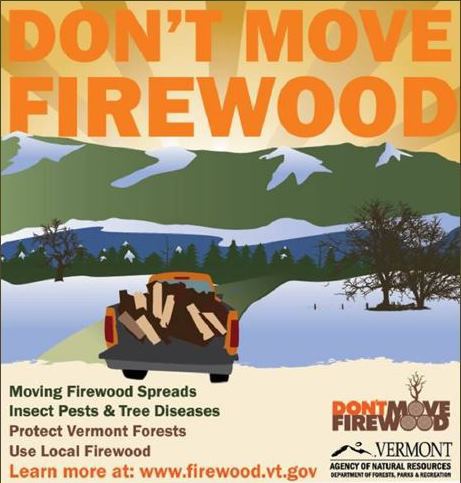 Help stop the spread by not moving firewood, burn it where you cut it. ~VT Agency of Natural Resources 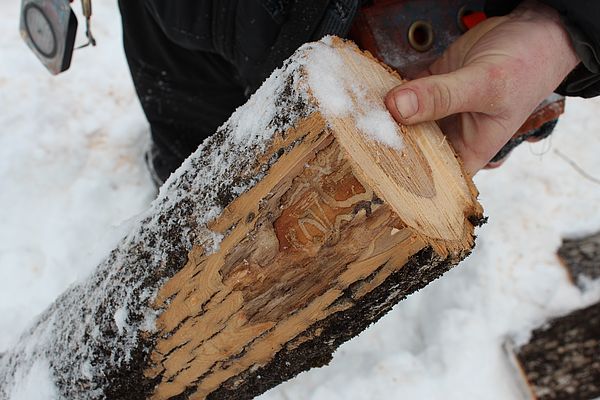 What is emerald ash borer?

Emerald ash borer (EAB) is an exotic beetle that has been killing ash trees in North America. Native to China, eastern Russia, Japan, and Korea, it was found near Detroit in 2002.

What kind of damage does it do?

EAB feeds on all species of ash. None of Vermont’s native ash trees are resistant to the insect. Mountain-ash is not a host because it’s not a true ash species. It takes 2-4 years for infested trees to die. Three in a thousand ash trees may "linger"; research suggests they may have some genetic resistance. But mortality is widespread where the insect occurs. EAB damages trees by boring through the inner bark. Heavy feeding by the immature, grub-like larvae blocks the movement of water and nutrients. Branches as small as 1" in diameter can be infested. Upper branches are often infested first.

How can I tell if I have EAB?

Woodpecker damage to live trees may be the first sign that a tree is infested. When feeding on EAB, woodpeckers scrape off outer bark, leaving smooth, light colored patches. If the bark is removed, S-shaped galleries weaving back and forth on the surface of the wood would be visible.The D-shaped exit holes are good EAB indicators, but are only ¼” long and hard to see.

Adult beetles are ½” long and metallic green. Under the wing covers, their abdomen is purple. Beetles are found between June and August. Click here for a link to learn how to identify EAB and make sure you're not mistaking it for a native insect.

If you think you might have EAB, report it. Collect and/or photograph any suspect insects. If you can't reach someone at the contact numbers below, call the EAB hotline at 1-866-322-4512.

What will happen when EAB is found in Vermont?

We won’t get rid of EAB by removing ash trees. This has been attempted unsuccessfully, time and again. Even when all ash within 1½ miles of known infested trees were cut, the beetle was soon found beyond the treatment area. Because it’s accepted that established infestations cannot be eradicated, the state is unlikely to implement widespread ash tree removal.

Where EAB has spread into forest stands, most ash trees have died within 6 years. Once trees die, additional sunlight reaches the forest floor. This stimulates the growth of young trees and other plants, including non-native invasive species if they are present. While they’re standing, dead ash trees may provide feeding and cavity sites for wildlife, but they also create a hazardous situation for recreational users, loggers and firewood cutters.

In other states, log prices have been affected as much by the threat of EAB as by quarantines. Landowners harvested more ash as the insects approached, flooding the market, and driving down log prices. By the time the insect actually arrived, the easily accessible ash had already been cut. With less ash available, prices went up.

“Trap trees” can indicate whether or not your woodlot is infested. By monitoring your own trees for EAB, you will know when the risk of mortality becomes urgent. To find out how to use the girdled trap tree technique, ask your consulting forester, or contact one of the offices below. Vermont officials have no plans to remove infested trees on private land.

Should I cut my ash trees now?

It could be many years before EAB shows up in your woodlot. Consider the ecological, aesthetic, and economic value of your ash, your tolerance of risk, and your objectives for ownership. Stay abreast of new information to avoid short-sighted decisions. Visit VTInvasives.org for the latest news on EAB.

If your land is enrolled in the Use Value Appraisal program, you must follow your approved forest management plan or an approved amendment. Contact your consulting forester if you wish to change your planned activities, treatment schedule, or management objectives. Remember that the county forester needs to approve any changes before the management activity begins.

Work with a consulting forester to protect your interests and your forest. Studies have shown that woodland owners who use professional forestry services before they cut make more money and are more satisfied with the results than owners who sell timber on their own.

Plan for EAB now if you have ash. It may take a while to carry out your plan, especially on large ownerships. Know what’s at risk: how much ash you have, its size and quality, and where it’s located.

Growing ash sawlogs is a riskier long-term investment than it used to be. During scheduled harvests, take steps to limit your exposure to loss. Reduce the percentage of ash if it exceeds 20%. Review your diameter target (how big to grow trees before cutting them) with your forester, discussing site quality, tree condition, and markets. To keep from degrading your woodlot, retain good quality trees of a variety of species.

If you’re growing trees for timber income, don’t cut immature ash too early. If the trees are too small to yield high value sawlogs, you may get a better return if you allow them to grow. They will increase in volume, and may improve in grade, which will lead to a better return.

If you decide to cut, consider leaving scattered ash trees in the woods. The last trees standing will be the last to produce seed. Hope for the survival of ash species will depend on fresh seeds to start a new generation of trees.

Reassess your plan if EAB is detected in or near your county. Keep abreast of news about the insect. The threat of imminent tree mortality increases when EAB is within 10 miles of your property.

What else can I do?

Spread the Don’t Move Firewood message in your town. Visitors who bring infested firewood to second homes or campgrounds near you put your trees at risk. Talk with neighbors and campground owners. Post leaflets, available through the contacts below, in your community.

Know when EAB arrives near you by supporting detection efforts. Help spread the word in your community; a variety of outreach materials are available through VTInvasive.org.

Think big. Take action. Encourage your town to plan ahead for EAB. By addressing issues before EAB arrives, the loss associated with an infestation can be spread over a longer period of time. Neighboring communities can coordinate to share resources and reduce costs. Take a look at this Preparedness Checklist for Vermont Cities & Towns.

Is there any hope?

We’ve only known about EAB since 2002. Our knowledge about the insect is rapidly expanding. A substantial research effort is underway to improve insect management and tree survival.

Scientists are investigating natural enemies of EAB. Parasites and predators significantly reduce EAB populations. Several parasites from China have been released, and are now established in the US. As these efforts continue, the threat of EAB may be diminished.

Many healthy ash trees of all sizes are still growing in every infested state. Even where mortality has been severe, the occasional “lingering” ash has survived. Partial resistance has been found in North American blue ash. White ash is thought to be genetically diverse, providing hope that some genetic resistance may occur in that species as well.

Citizens are encouraged to look for signs and symptoms of the emerald ash borer and report suspicious findings on VTinvasives.org. Detailed information about the pest and what to look for may be found at the same website. Vermonters can also learn more about what EAB damage looks like how to report a potential sighting by visiting.

Private land owners looking for information about managing ash in woodlots and UVA (current use) plans should contact their county forester. Click here to find a list of the Vermont County Foresters. 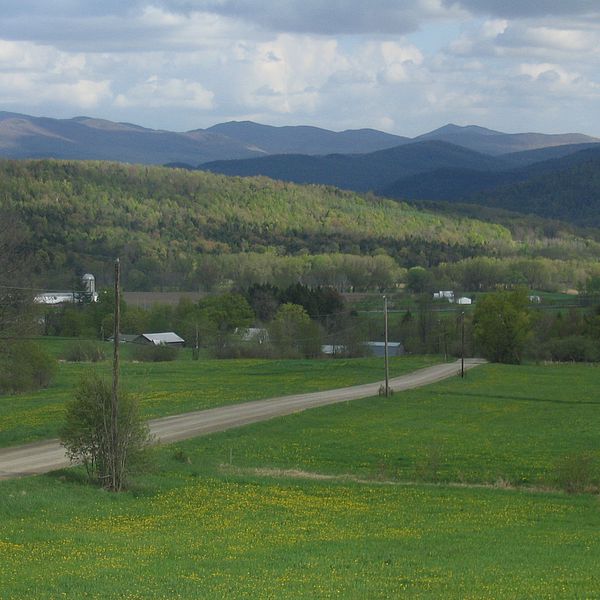 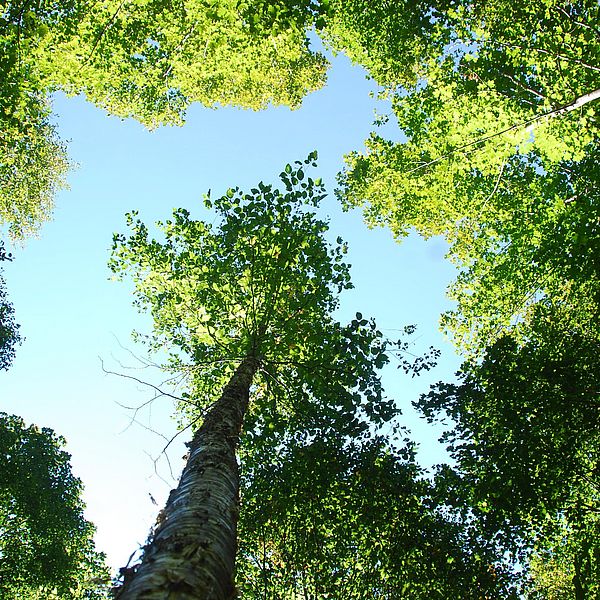 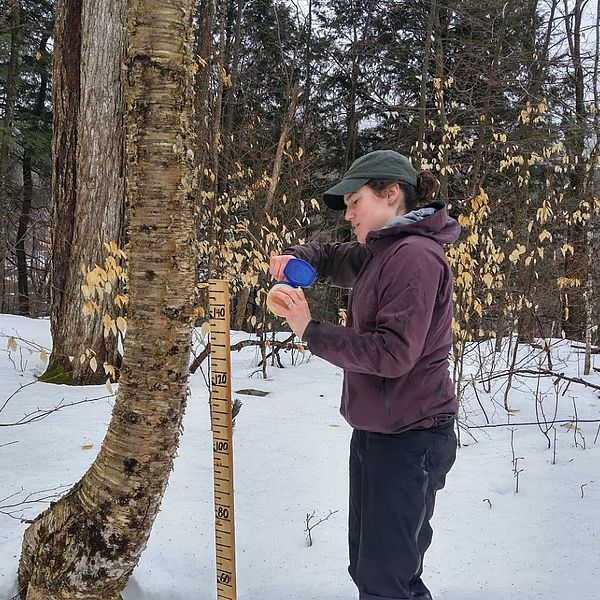 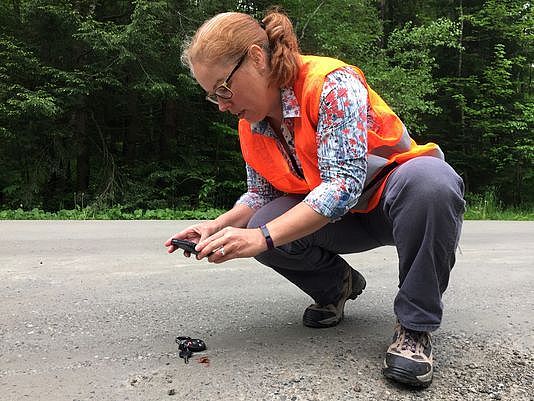 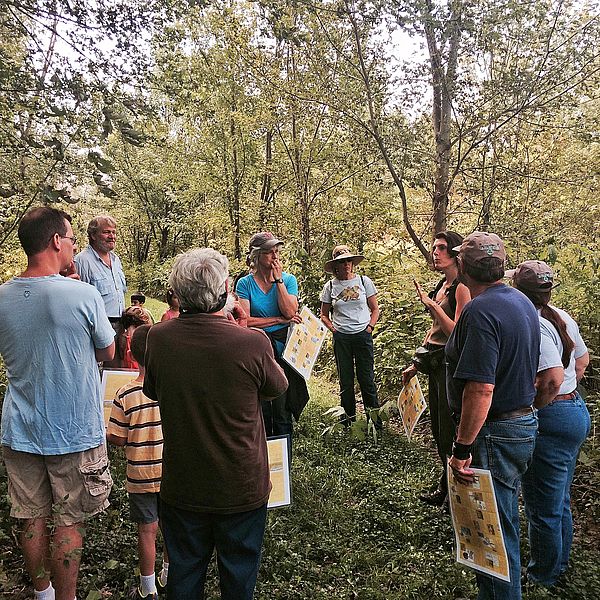