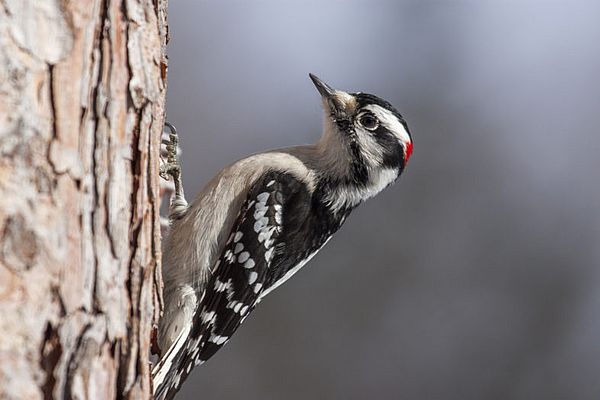 Downy Woodpeckers, a common species around many homes, declined by 3.3% annual over the 25-year study period. / © K.P. McFarland 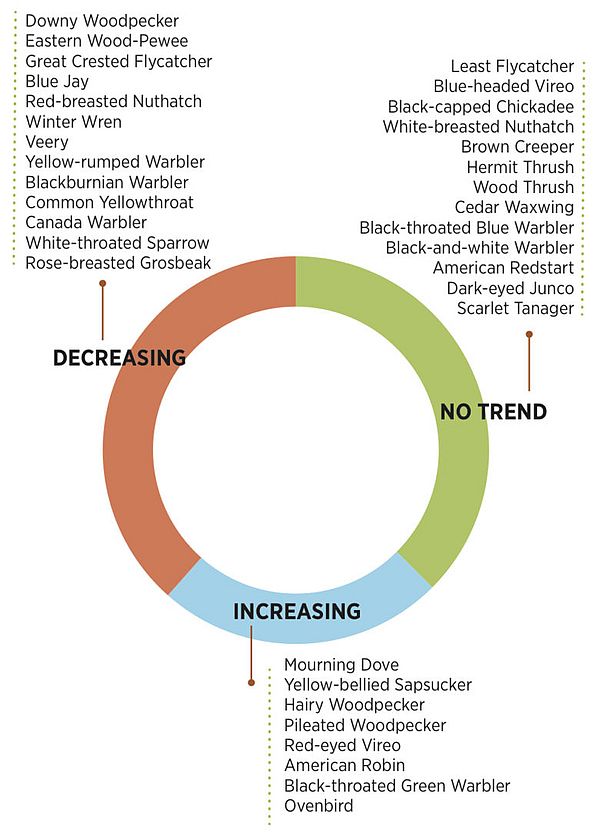 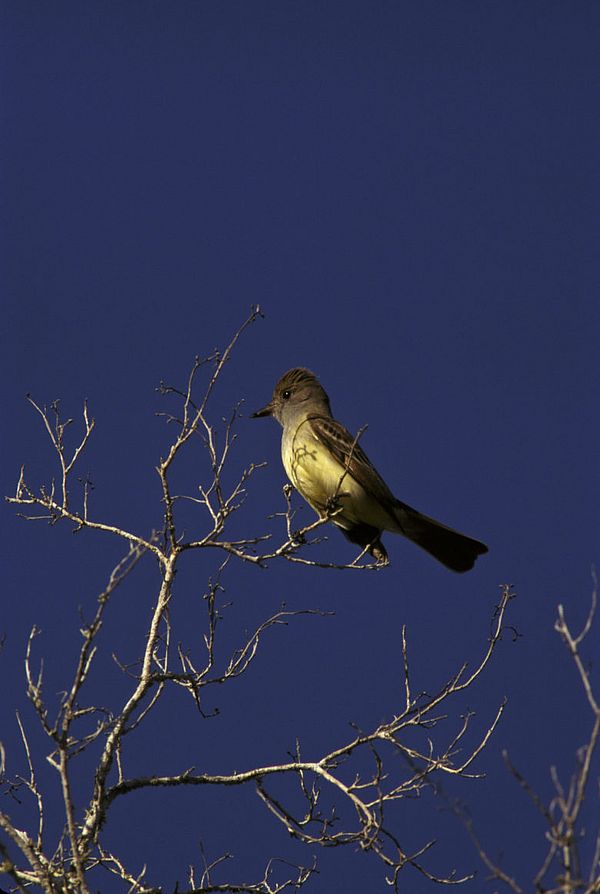 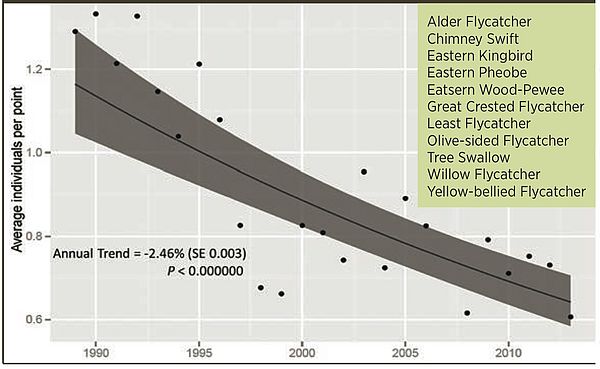 As a group, aerial insectivores (the 11 species listed in the box) have declined by 45% on FBMP surveys, corroborating an alarming trend in North America. 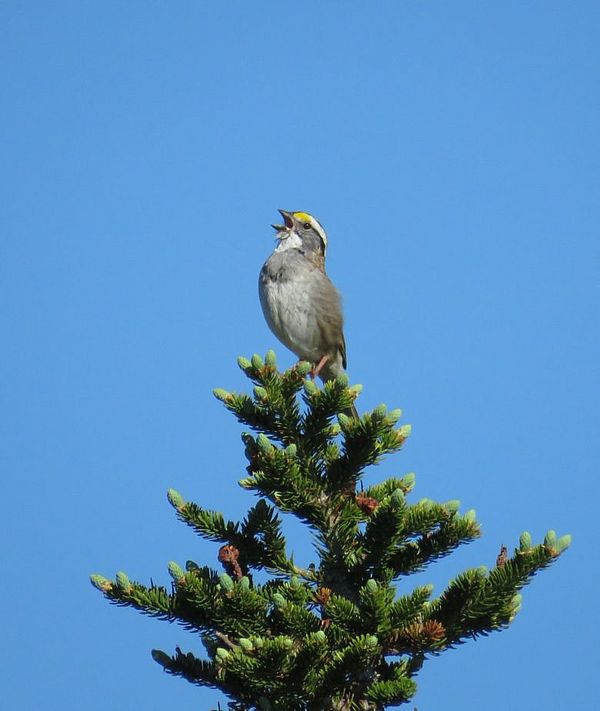 Both Yellow-rumped Warbler and White-throated Sparrow (shown here) reached their greatest abundance on study sites located in coniferous wetlands, where they both declined significantly. /© Steve Faccio 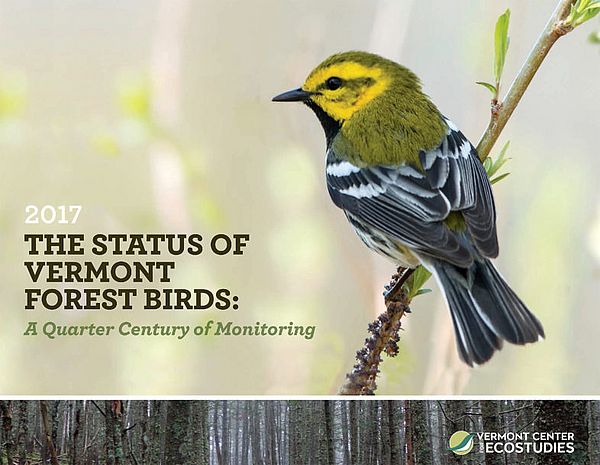 Report cover: The Status of Vermont Forest Birds: A Quarter Century of Monitoring

A 25-year study of Vermont’s forest birds, including woodpeckers, warblers and other iconic species, has documented a 14.2 percent overall population decline during the period, raising concerns about birds and forests alike.

In one of the longest-running studies of its kind in North America, the Vermont Center for Ecostudies (VCE) also issued practical recommendations for landowners who may want to conserve or manage their forests for bird abundance and diversity. Vermont forests support more than 125 bird species, VCE reported, and more than 47,000 jobs in the state.

“Whether we enjoy them at the feeder or in the wild, birds are vital to the health of our forests,” said Steve Faccio, a VCE biologist and principal author of a report on the study titled The Status of Vermont Forest Birds: A Quarter Century of Monitoring (available at www.vtecostudies.org). “If we ignore these trends in bird populations, we risk losing not only birds but the vitality of our forests as well.”

While they require forests for nesting and migration, birds in turn promote forest health. They foster tree growth, for example, by consuming leaf-eating insects. Birds also disperse seeds and pollinate trees and other plants.

In its study, VCE methodically counted birds in 31 mature, unaltered forest tracts across the state each June for 25 years during the peak of breeding season. Overall, the counts revealed a 14.2 percent decline in abundance among 125 bird species from 1989 through 2013, with some species increasing, some decreasing and some remaining unchanged.

One guild of birds in particular — called “aerial insectivores,” which catch and eat insects on the wing— showed the most disturbing decline: a 45 percent drop in abundance over the 25-year study period. These included Chimney Swift, Eastern Phoebe, Eastern Wood-Pewee and Tree Swallow. The steep decline, VCE reported, most likely reflects broad-scale changes in insect populations, attributed to a variety of causes, such as pesticide use, acid deposition and climate change.

Any number of factors, including routine or “natural” changes in forest composition, affect bird populations.As a forest matures, its mix of birds will inevitably change. The study came during a period of statewide forest maturation, dwindling insect populations, and the arrival of West Nile Virus in Vermont. But VCE identified several “imminent, serious threats” to birds and forests:

VCE concludes its report with a series of practical recommendations for forest property owners who might be considering outright conservation or forest management to promote bird abundance and diversity. Among the objectives is “heterogeneity” in forest stands — trees of varying ages —  which supports a full suite of Vermont’s native forest birds. The guidelines are not intended for commercial timberlands.

With a 25-year study no small feat, VCE relied on its own staff biologists and a dedicated corps of skilled volunteer birdwatchers, who would rise well before dawn to follow rigorous and long-established protocols for counting birds. Year after year, the birdwatchers would walk the same route through a designated forest site, stopping at five pre-determined points and counting every bird they saw or heard over the course of 10 minutes. For the report, VCE analyzed 2,464 such point count surveys, in which a total of 32,381 birds of 125 species were detected, for an average of 13 birds per point.

“That VCE has been able to continue this effort for 25 years is a testament to the dedication of the researchers and the citizen scientists,” said Dr. Allan Strong, an ornithologist and associate professor in the Environmental Program at the University of Vermont. “Perhaps more importantly, much of our understanding of bird population dynamics comes from roadside counts, so having data from interior forests provides a unique perspective on how our bird populations have changed over the last quarter century.”

VCE continues to run the population surveys, known as the Vermont Forest Bird Monitoring Program, which is now in its twenty-ninth year. This latest analysis relies on data generated during the project’s first 25 years.The Vermont Center for Ecostudies, with headquarters in Norwich, Vermont, promotes wildlife conservation across the Americas using the combined strength of scientific research and citizen engagement. Working from Canada to South America, from mountains to grasslands, VCE biologists study and protect birds,insects, amphibians and other wildlife. Joining VCE in the work is a dedicated corps of citizen volunteers. 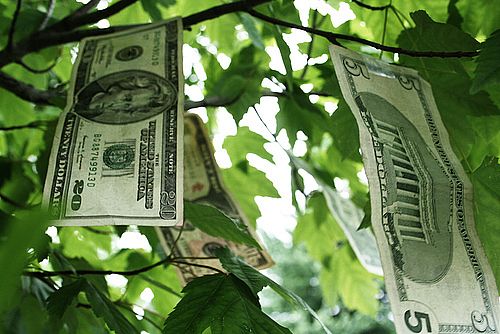 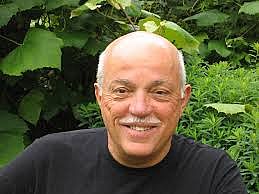 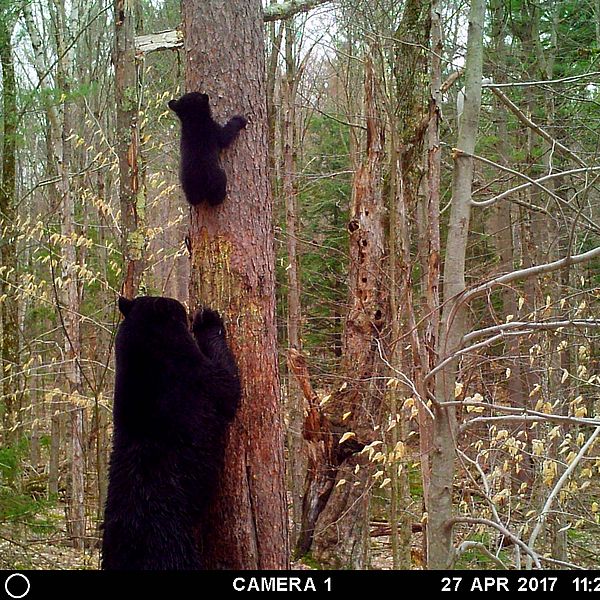 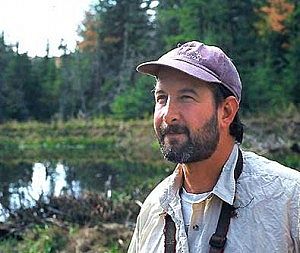 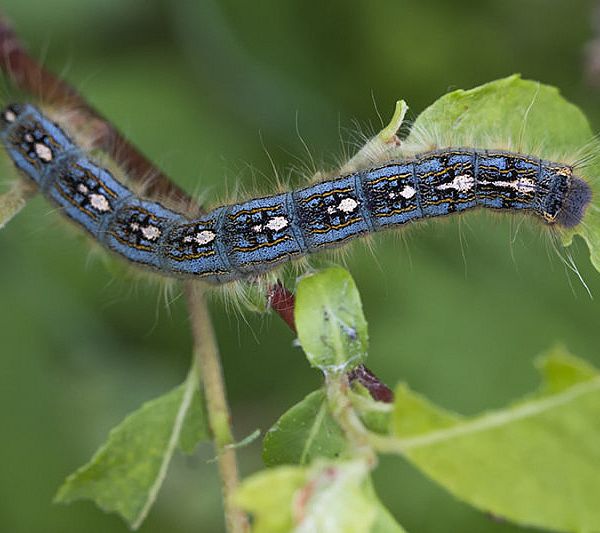