A forest tent caterpillar, the larval stage of the moth Malacosoma disstria below. 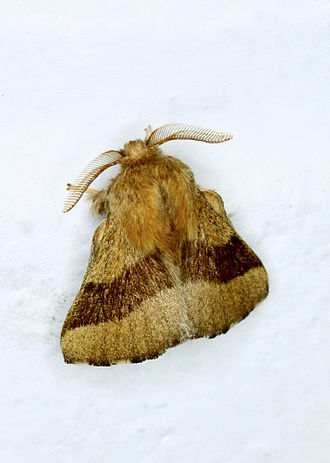 The adult stage of the forest tent caterpillar. 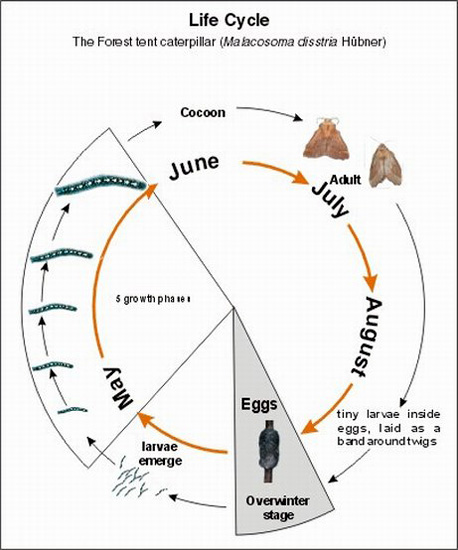 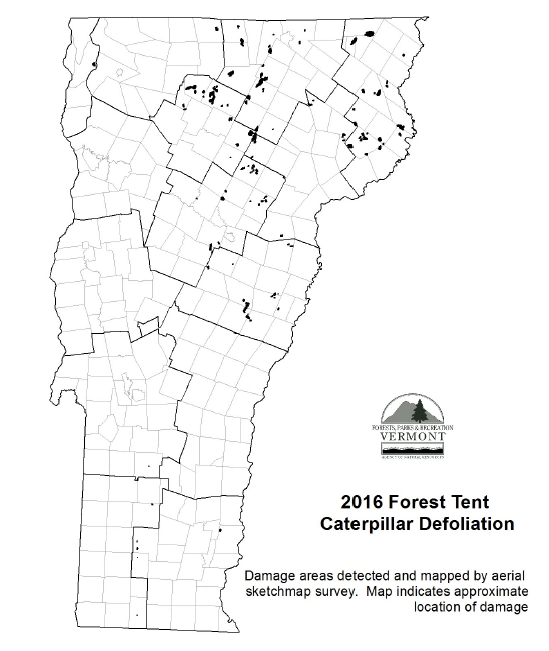 The Forest Tent Caterpillar (FTC) is a native insect that has a natural cycle of abrupt population expansion and crash. This insect has evolved in the Northern Forest and plays a role in natural stand dynamics. In the pre-Columbian forest, the composition of sugar maple and ash was lower than it is today. When the forest tent caterpillar defoliates trees in the early spring it allows for more sunlight to hit the forest floor and can result in the establishment or release of regeneration, allowing the forest to perpetuate. In the long run this is good for the forest.

Due to past management practices, reestablishment of the forest on former agricultural clearings, and the persistence of maple as a timber and maple sap crop, today’s matrix forest has a much greater maple component.

The forest tent caterpillar today can cause harm to the maple and timber industry if tree health is impacted by decline or mortality. In general, if the forest is healthy, the trees can withstand the periodic defoliation. An outbreak typically lasts 2-6 years. The insect feeds in May and June, but the trees usually refoliate by the end of July. Other stresses add to the response, for example drought can prevent refoliation which could lead to decline. Outbreaks also happen every 6-10 years, but it should be noted that the outbreaks do not usually occur in the same location.

In 2016, approximately 24,500 acres of defoliation were mapped, primarily in Essex, Lamoille, Orleans and Caledonia counties. In 2017 the area of defoliation has expanded, including into Franklin county. Outbreak collapse is caused by a number of factors including starvation, malnutrition from eating less preferred species, viral or fungal diseases, and high rate of parasitism. The friendly fly is a major parasite, laying its eggs in the eggs of the moth. Fungal agents also contribute to collapse.

Management strategies that may prevent or minimize outbreaks include maintaining a high species diversity in the forest. FTC does not feed on red maple or most conifers. Red maple is also preferred sap species, so keeping a mix of species in the forest is a wise idea for many reasons. The best sites for sugar maple have a high amount of calcium and magnesium. These sites tend to recover faster as the trees are generally at optimum health in these “best site” scenarios. These sites are also the most likely places where sugar maple was present on the landscape in pre-Columbian times. Our use of the forest and our past management decisions may have had an effect on the potential impact across the landscape of FTC defoliation.

Tree stress from thinning or harvesting can exacerbate the effects of defoliation.  It is recommended that trees not be harvested while an outbreak is developing and should be delayed for 1 to 3 years after a defoliation. It is also recommended to tap conservatively in that same time frame. If you have evidence of FTC and defoliation you can contact the VT Department of Forests, Parks and Recreation to ask for a fall egg count survey. About half of the sugarbushes surveyed this last fall showed no evidence of concern while others were designated for a spray program.  The biological control Bt, which is a bacteria can be used to spray sugarbushes. In 2017, 18 sugarbushes covering 3,600 acres were sprayed. Bt is a nondiscriminate killer of all moths and butterflies. The spray affects the canopy of the trees so any moth or butterfly feeding at the time will be destroyed. Moths and butterflies are pollinators in our forest, so thoughtful consideration should be part of the decision to spray.

Remember this is a native pest, which evolved in the Northern Forest. Managing our forest based on natural stand dynamics, maintaining diversity, growing sugar maple on sugar maple sites and thinking to the future with regeneration are ways to keep the maple and our forests healthy.